Why is the world ignoring human rights violations in Egypt?

According to an economic study published by the independent newspaper “Mada Masr”, only 2.2% of the budget was spent on Education in 2019, while Article 19 of the Egyptian constitution states that “the state shall commit to allocating a percentage of government spending for education of not less than 4% of the gross national product, which will gradually increase until it is in line with international rates.”

Only 1.2% of the budget was spent on the Health sector in 2019, while Article 18 of the constitution also stipulates that “the state shall commit to allocating a percentage of government spending to health not less than 3% of the gross

national product, which will gradually increase until it is consistent with international rates."

"Omar Abdel Hamid Abu Al-Naja" and his wife, "Manar Adel Abu Al-Naja", along with their infant child, "Al-Bara" were arrested in their house in Al-Sa'a Square in Alexandria on March 9, 2019. They were taken to an unknown destination. They have not been presented to any legal authority until now and their fate remains unknown.

The Supreme State Security Prosecutor decided to renew the detention of prominent human rights lawyer and political activist Mahinur Al-Masry in case No. 488 of 2019. Mahinor faces charges of terrorism and misuse of social media to spread rumors against the state. El-Masry has been organizing peaceful protests and supports activities for political prisoners, using social media to denounce human rights violations. Often dubbed as a voice of the revolution and a champion of women's rights, her activism covers a wide range of activities. In June 2014, she was awarded the Ludovic Trarieux International Human Rights Prize while being in prison making her the second person after Nelson Mandela to be awarded that prize while in imprisonment. Mahinor has been declared a prisoner of conscience by Amnesty International.

Taxi driver, not a spy

Egyptian-American citizen Mustafa Kassem died in prison after going on a hunger strike. The 54-year-old was a New York taxi driver, originally from Egypt, who was arrested on a home visit in 2013 on accusations of being a spy and taking part in anti-government protests. He was convicted and sentenced to 15 years in prison in 2018, after being held for five years without any charges. Mr. Kassem had always denied the charges against him. Kassem's brother-in-law Mustafa Ahmed, had previously described conditions at the maximum-security Tora prison, where he was kept, as dire. "The cells are filthy, infested with insects, rodents, and snakes" he wrote in an op-ed for The New York Times last year.  "They have no ventilation, sun or light. Kassem and the other prisoners have no access to clean water, a bed, a chair or any books." The top US diplomat for the Middle East, David Schenker, described Mr. Kassem's death as "needless, tragic and avoidable".

Hossam Saleh Bastawi, a student at the Faculty of Engineering of the Alexandria University, disappeared without a trace for nearly 45 days after being taken from his home by the police. A security guard finally took pity on the prisoner and contacted his family: Hossam was batteling death in a national security detention center due to “severe illness”.

Assault, threats of rape, and disappearance

46-year-old Factory worker Nasser Khalil Mahmoud Mohammed was assaulted in his home on December 23 in a security ambush in Al-Ajmi in Alexandria. During his arrest, his wife was physically and verbally harassed, partially disrobed and threatened with rape by the police officers. Until today his whereabouts remain unknown

Guilty even if innocent

Samir Bedaiwi is a law student who was arrested on January 15, 2016. He then disappeared for 3 months before his mother found him in Tora, a maximum-security prison for political prisoners. Signs of abuse and torture were clear on him. He and 14 others like him were added to the infamous case Nr.108 and sentenced to death without sufficient evidence of their guilt. The charges that the military prosecution presented in case Nr.108 included: Attempted murder and murder of prominent law enforcement figures, Joining a group that was established contrary to the provisions of the law to disrupt the provisions of the constitution and prevent state institutions and public authorities from exercising their business and damage to national unity and social peace. In other words, they were all political prisoners.

Shady Srour is a 23-year-old Egyptian actor who built his career on social media platforms. In 4 years, He reached more than 8 million followers and 1 billion views. He became famous as a comedian on youtube with his short videos that are sarcastic, witty and socially critical. Shady was detained in December 2019 and has been since under investigation over charges that he had „cooperated“ with the banned Muslim Brotherhood group and published “false news.” Srour denied any connection with the Muslim Brotherhood in the case known in the media as “al-Safafeer” (whistles), which refers to calls for anti-government protests last March. The secular comedian further asserted that he is against the Islamist Muslim Brotherhood group. He is still in prison.

Radwa Mohammed is an Egyptian activist who criticized President Abdel-Fattah el-Sisi and his wife in a series of viral videos. Radwa Mohamed's videos are very popular in Egypt, where each video can reach thousands of views and is shared on multiple platforms. One of the last videos that she posted sparked the ire of the government. The video was called “Human rights don’t exist in Egypt” in which she criticized the Egyptian First Lady Intisar al-Sisi for “doing nothing to address the poverty and major human rights violations” taking place under her husband’s regime. Radwa Mohamed was detained at her home on Wednesday, November 12. 2019, and accused of spreading false news. Her current whereabouts are unknown and fears for her safety have sparked a viral hashtag - #WhereIsRadwa - on Twitter.

I hope this letter reaches the media as fast as possible. 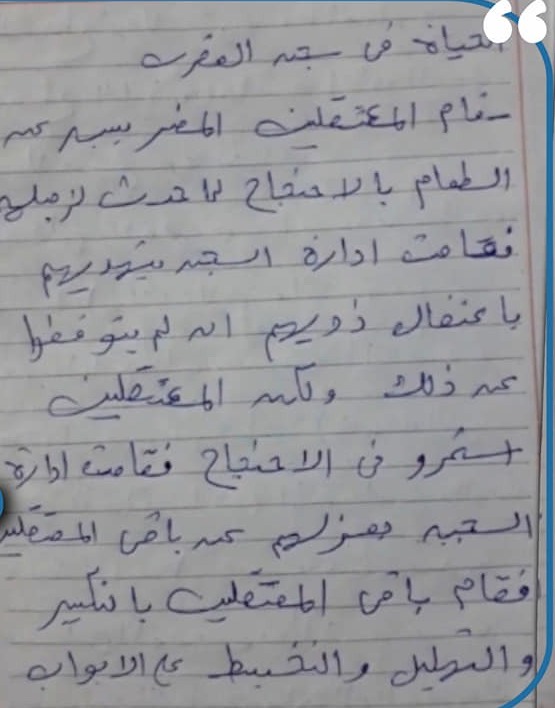 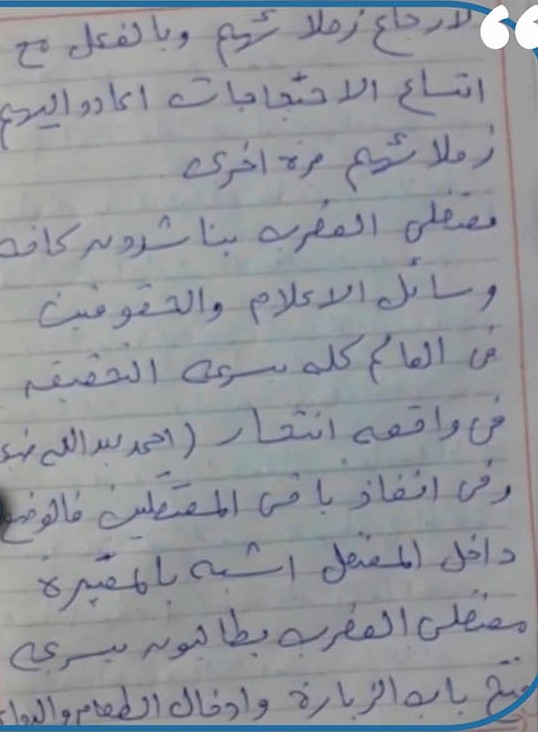 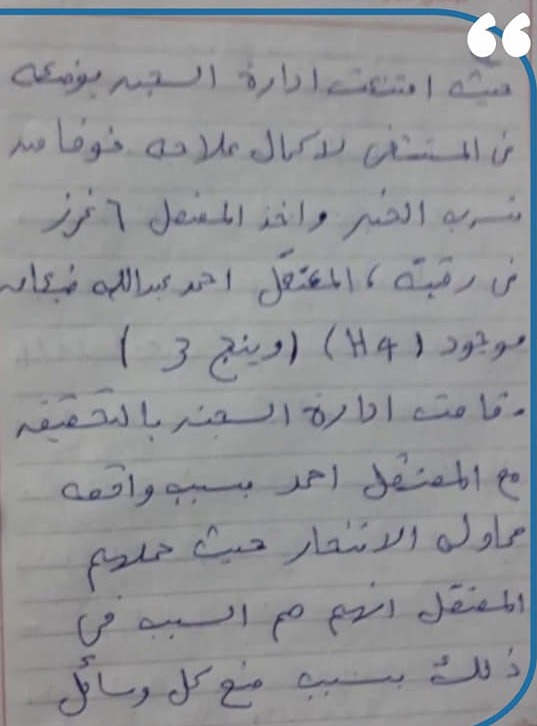 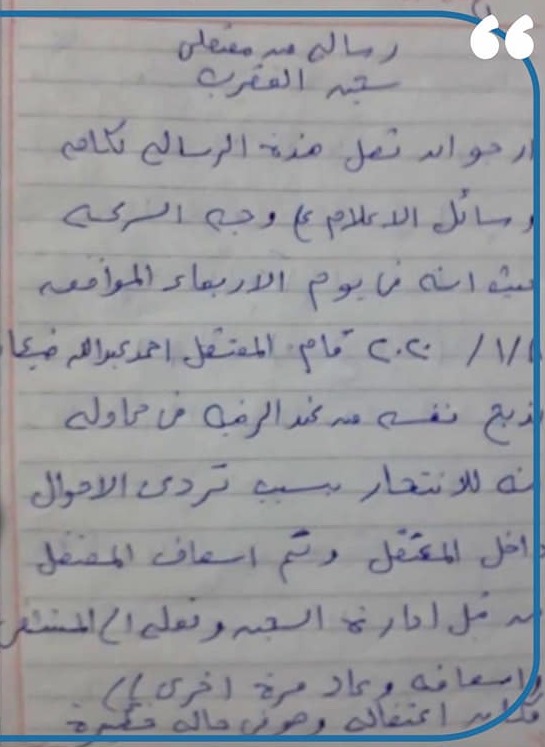